The Ki Society was founded in 1971 by Soshu Koichi Tohei Sensei (1920-2011). The Ki Society is active through dojos in Japan and many countries around the world and through its over 50.000 members. Since 2007 it is lead by Kaicho Shinichi Tohei Sensei. Our mission is to help build a positive society through the teachings of oneness of mind and body and oneness with the universe. We will do our best to support all people who wish to grow and develop through these five main disciplines of our study:

Tohei Sensei founded the Ki Society to make the experience of oneness of mind and body accessible for everyone. While every practice method leads to this experience, every method covers different aspects and areas of application. Through the study of the various methods every practitioner can find an access to the experience, whether he or she came to this practice searching for better health, better coping with everyday stress, more relaxed relationships, for more appropriate action in conflict situations, or even for being able to physically defend oneself. In the dojos of the Ki Society, you will see people of all age groups, professions, religious beliefs or cultural backgrounds training together with positive minds. Some teachers also extend this teaching to groups outside the usual dojo setting by teaching seminars at companies, schools, universities and sports organizations.

The Ki Society is in Japan incorporated as “Shinshin Toitsu Aikido Kai” since 2010, while internationally the Ki Federations and Dojos continue to be organized under the umbrella called Ki Society. All Ki Federations, which are themselves umbrellas for the teachers, dojos, clubs and students in a country or continent, are linked directly to the Ki Society HQ Japan and report to Kaicho Shinichi Tohei Sensei.

The organizational setup in Europe went through some challenges when in 2001 the main teacher for Europe decided to leave Ki Society and form his own organization. Some dojos, however, wanted to stay with Ki Society and Tohei Sensei’s original teaching, and since then more and more have organized themselves again within the Ki Society –  with the help of other highly experienced teachers. Today, we are organized as follows:

Western and Central Europe are being supported since many years by Christopher Curtis Sensei from Hawaii as a Headquarter Advisor. With the approval of Shinichi Tohei Sensei the Europe Ki Federation has been founded in November 2018 with Toby Voogels Sensei as its Chief Instructor. Christopher Curtis Sensei remains Headquarter Advisor and teaches several seminars in Europe each year. 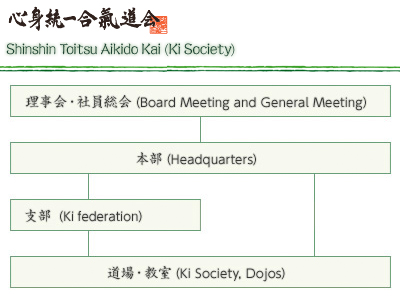